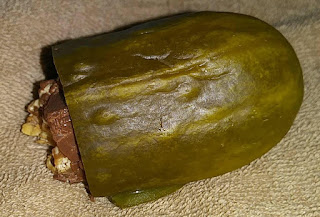 There was a picture of big dill pickles stuffed with Snickers candy bars -- so yes that's a thing. I didn't post the photo. I merely commented, "Americans are terrible people." And that, dear friends, was that. Within minutes I received a notification that I had "violated community standards" and was banned from FaceBook for 24 hours, effective immediately. I read my way through the notification. I objected. There was no response, no appeal. Done. Well.

I've known lots of people serve time in FaceBook jail. I know a number of artists, many of whom have been put away multiple times, usually for male nudity. I also know a number of activists on various fronts; LGBTQ rights workers, defenders of sex-work, free speech advocates, all sorts, some of whom have been booted from the platform temporarily too. I know at least one photographer who has been fighting the good fight for a very long time, and one delightful provocateur who's been canned nearly as often as he's been out. Never happened to me before.

Shocked? Why I nearly fainted.

I am among those who have supported efforts to hold social media platforms accountable for policing their content for hate-speech, racism, and the like. They have none of them done a very good job of this. At least since the Idiot Insurrection of January 6th, 2021 and the storming of The Capital, a token effort would seem to have been made on most of the major sites to address the very worst of the knuckle-dragging Nazis, supremacists, and radical whack jobs by closing some of their accounts and blocking certain purveyors of hate.  Pretty small beans, as I understand it, other than kicking the Idiot in Chief off of Twitter and Facebook, at least temporarily. I still support this new found acting out of social responsibility on the part of the Billionaire's Boys Club and hope to see more, and more substantive change.

If I buy a pair of slippers online and ten minutes later all my social media accounts offer me more slippers, how hard, one has to ask, can it be to track actual Nazis and klansmen? If I "like" someone's photo of a pound cake and then get flooded with ads from Goldbelly for Carla Hall's 5 Flavor Pound Cake...? (It was good, by the way so thank you, Ms. Hall. A little dense, very expensive, but delicious.) If these miraculous algorithms -- which in my head is always pronounced, "Al Gore Rhythms," -- can track my every consumer impulse and quite rightly offer articles from The Washington Post in preference to The Washington Times, ask me to donate to Stacey Abrams' Keep Up the Fight and John Fetterman's campaign for the Senate, and avoids invitations to Mar-a-Lago, then surely...? No?

On reflection, I shouldn't be surprised to learn that Mark Zuckerberg does not quite ken irony. In case any others might be confused, let me just say that I do not believe that Americans are terrible people. Or, to put a finer point, I don't think we are always. Our history is short by the standard of human civilization but fair is fair and we have done a remarkable job for such a young country when it comes to terrible things. I do think we have done and continue to do some considerable good in the world. At least we've proven ourselves capable of doing both, which is both disappointing and predictable in almost equal measure. This does not, to my way of thinking and according to my reading of the Constitution and our history make me either unpatriotic or in anyway nuts. Indeed, when one thinks of the levels of undisguised villainy and stupidity immediately accessible on the internet, I am downright upright.

So, how then did I end up in the virtual clink? See: irony, Zuckerberg of course, but also please note, in the absence even of the obviously harmless context of that comment on that post, just what the sentence was that silenced me for a day.  Isn't it fascinating that this was what tripped the trigger? Who would have guessed? Evidently a Georgia Deputy Sherriff/racist spokesmodel can share giggles at xenophobic  misinformation and go on to speak not just for his department but his type when describing a murderous  goon as having had "a bad day," but me suggesting in good fun that "Americans are terrible people" is just that little bit too far for the mechanical censors.

I am not outraged -- at this temporary suspension from FaceBook, at least.  Nor am I fishing for outrage on my behalf. When it happened I admit to being taken aback and very confused. Took a minute, honestly. When I finally tripped to the truth, I was very disappointed (how parental that sounds) but I felt no urge to mount a boycott or swear-off social media or write to my Congressperson. Perhaps I should be up in arms, but I confess to a certain amusement at the absurdity of my example, or rather this example being made of me. Programmers can be such clumsy fuckers, no? And who exactly was the management genius who had to sign off not only on this ruthlessly silly new software but also on the endless stream of potentially punishable variations of the shocking indictment of the American Character with which I tried to crash the internet? Makes one question our  technological hegemony, don't it?

I would hope that there are any number of busy little tech dudes (and a still unfortunately smaller number of women) working to refine this, some of their first crude attempts at virtual civility. After all, it took them years to stop trying to pitch me a membership in Christian Mingle and skinny jeans.

For all the recent hue and cry -- to say nothing of the bellow and screech -- over "cancel culture" and the supposedly unprecedented reach of the rising generation's "woke-ness," I will not offer my brief exile as an example because that would be both silly and wrong. In the time it has taken me to write this little bit, I could easily have gone online and found example after example, many of them still being trumpeted on the Right, of the so-called "canceled" whose behavior and opinion absolutely deserved to be censured, and an almost equal number of propertied victims of cancellation who are still, unsurprisingly employed, publishing, recently hired elsewhere and or still living comfortably if not on their royalties (who does that?) then certainly on their continued commissions from The Weekly Standard, The American Scholar, and or  their advance from Regnery Publishing.  I do not deny that there have been and continue to be sincere and honest people being unfairly targeted for ridiculous offenses against the new community standards at, for example our universities and colleges, among other places. Nor would I willingly be lectured about my biases by teenagers, even admitting I got 'em and that they would be right to call me on 'em. That must be hell. It is the job of the young to discomfort and disabuse their elders. Did it myself in the day. Doesn't mean I want to hear from them personally, you understand. Please, no. (SO typical of my generation.)

If I wanted to provoke some of my friends, I might mention my complete collection of the essays of Joseph Epstein. I could admit that Vivian Gornick's infamously homophobic essay from nearly my whole lifetime ago has not kept me from reading every word she writes. I wouldn't dream of defending the behavior of Charles Dickens with his much maligned wife, but neither will I stop reading and recommending his novels. I still read Jefferson's letters with John Adams every 4th of July. If I can't bring myself to read overt antisemites like Celine, I should quickly admit that it was "..." that defeated me before I even knew what a shit he was. I might even go so far as to suggest that mine may not be such an untenable position for others, even persons younger than myself. I would naturally not insist because, well -- to whom on earth would I be in any position to do that?!

I offer this as at best a mildly cautionary tale. That's all. Hope it might amuse as well, though if it makes anyone angry I must say I would not be entirely disappointed by that response. Unless you're mad at me. Then I am sorry, And please don't feel you need to explain. I'm sure you're right.