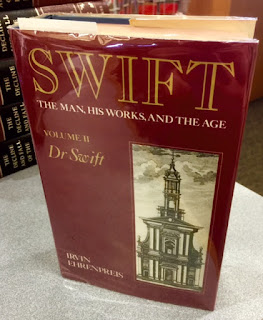 From Swift: the Man, His Works, and the Age, Volume II: Dr. Swift, by Irvin Ehrenpreis

"What they wanted was an unambiguous assertion that they were right and their enemies all wrong.  What they got was a statement of general laws according to which they might be on the right side in this case but would very likely be wrong in the next."

From Chapter 6, the Contests and Dissensions
Posted by usedbuyer 2.0 at 12:02 AM