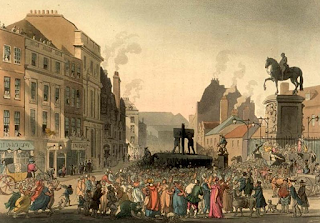 From The Poetical Works of Jonathan Swift

A DESCRIPTION OF THE MORNING

Now hardly here and there a hackney-coach
Appearing, show'd the ruddy morn's approach.
Now Betty from her master's bed had flown,
And softly stole to discompose her own.
The slip-shod 'prentice from his master's door
Had par'd the dirt, and sprinkled round the floor.
Now Moll had whirl'd her mop with dext'rous airs,
Prepar'd to scrub the entry and the stairs.
The youth with broomy stumps began to trace
The kennel-edge, where wheels had worn the place.
The small-coal man was heard with cadence deep;
Till drown'd in shriller notes of "chimney-sweep."
Duns at his lordship's gate began to meet;
And brickdust Moll had scream'd through half a street.
The turnkey now his flock returning sees,
Duly let out a-nights to steal for fees.
The watchful bailiffs take their silent stands;
And schoolboys lag with satchels in their hands.
Posted by usedbuyer 2.0 at 12:29 AM