Back in the Alley Again -- Or, Methinks the Fat Guy... 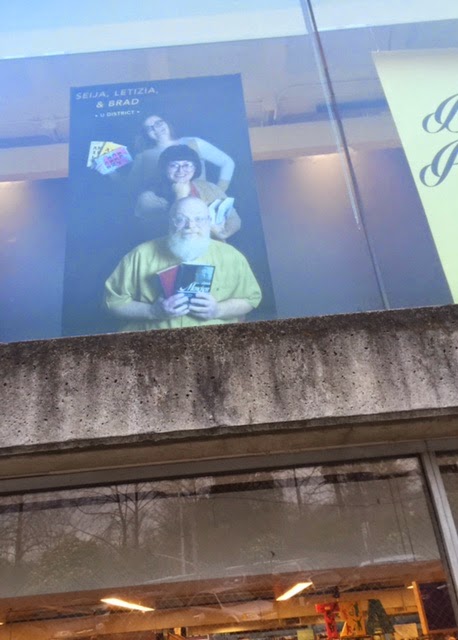 Last year, before Christmas, the Advertising and Promotions people sent over a request for various staff members to pose for the new Holidays campaign.  I'd done this the year before.  Lovely experience.  They made a charming video of us all, bookmarks, posters and window displays, etc.  It was all rather beautiful.  I even liked the pictures of me that they ended up using.  Quite sensibly, a whole different crew was requested for the new pictures this year.  It's a big store and an even bigger company so there are plenty of "new" faces from which to choose.

Well, come the day of the photo-shoot, someone -- I won't say who -- asked if I wasn't going with the rest of the models?  I said that I didn't think I'd been asked.  In fact, I was pretty sure that that was the point of making the new campaign.  New faces, remember?  Anyway, she was insistent that my name had in fact appeared on the 'call-sheet" and that I was expected next door, where the Promotions people were shooting the new campaign.  Okay.  So I went.  I hadn't worn anything special, hadn't selected any books to promote, was in no way prepared in other words, but I went with the rest.  There were three or four of us and more to come later.  Down the alley and up the stairs and there we were, standing on the black paper backdrop without our shoes, wondering what we were meant to do next.

"Brad," the photographer asked sweetly, "are you supposed to be here today?"

And I wasn't.  Some confusion it seems with email, or something of the kind.  I was embarrassed.  Looked like I was horning in.  I found my shoes and tried to flee. There was a flurry of embarrassed apologies all 'round and various voices raised encouraging me to stay anyway.  It was all rather mortifying.

Anyway, I stayed and pictures were taken.  Some of me alone with some books, others with two of my coworkers and books.  I tried to make everyone laugh.  Made the photographer giggle.  It was not a terrible experience.  As soon as I decently might, I excused myself and went blushing back to the sales floor.

The holiday campaign launched and I was pleased, frankly to not see myself in it.  It was, like it's predecessor rather beautiful.  If anything, it was better than the year before.  (My favorites were the pictures taken of employees reading to their kids.  These were marvelous!  All the babies looked beautiful, as did their doting parents.)  The theme was, "Books Are Our Passion" and I thought it all worked extremely well.

In my capacity as one of the people responsible for the bookstore's social media, I sent an email asking for electronic versions of the photographs to put up on the bookstore's blog and Tumblr accounts.  The Promotions people sent me a file with the pictures they'd taken of me.  Yet another embarrassing misunderstanding. ("What an ego on that guy!  You know, he invited himself to the photo-hoot this year.  Now he's pestering me for his pictures.")  No! Not what I thought I'd asked for.  "No, no," I insisted, I wanted the pictures used in the campaign!  Not me, honest!  You know, the good pictures.  Not me.  Honest.

("Now he says he didn't want the pictures and that they're not very good.  We could've told him that.")

Eventually I got the good ones -- the ones of other people -- I wanted and posted them on various platforms.  Meanwhile I had that file of photographs of me.  They were not good.  I was glad they hadn't used them.  Absolutely right, on so many levels.  In all but one or two I looked a rather sweaty mess.  Now, I often look a sweaty mess, so it wasn't as if I found this shocking.  It was just that I looked a particularly ill-prepared sweaty mess.  I'd worn an acid-green, short-sleeved shirt, untucked, baggy black jeans and white socks.  This is something like my uniform, but that particular shirt had not photographed well against my rather florid complexion. Worse, I'd left the bottom shirt-button undone, so in a number of the more... athletic shots: Usedbuyer2.0 draped on a ladder, or Usedbuyer2.0 stretched out, full-length on his side like an elderly odalisque, Usedbuyer2.0 squatting on a stack of hardcovers, my shirt had came open to reveal the vast white expanse of my undershirt.  I looked pupal, like my chrysalis had burst prematurely.  Not flattering.  I saved the two not entirely appalling shots from the file for use one way or another here and deleted the rest.  Bullet dogged.

And there, I thought, was an end to it.

Then a few weeks ago, someone came in the bookstore from the parking lot and said, "Hey, I just saw you in the alley!"  Not unheard of, certainly.  I've led a fairly quiet, not to say contemplative life, but I've hardly been a monk.  I've seen, and been seen in my share of alleys.

"No," the stranger insisted, "your picture's in the window."

I blanched.  Surely not? 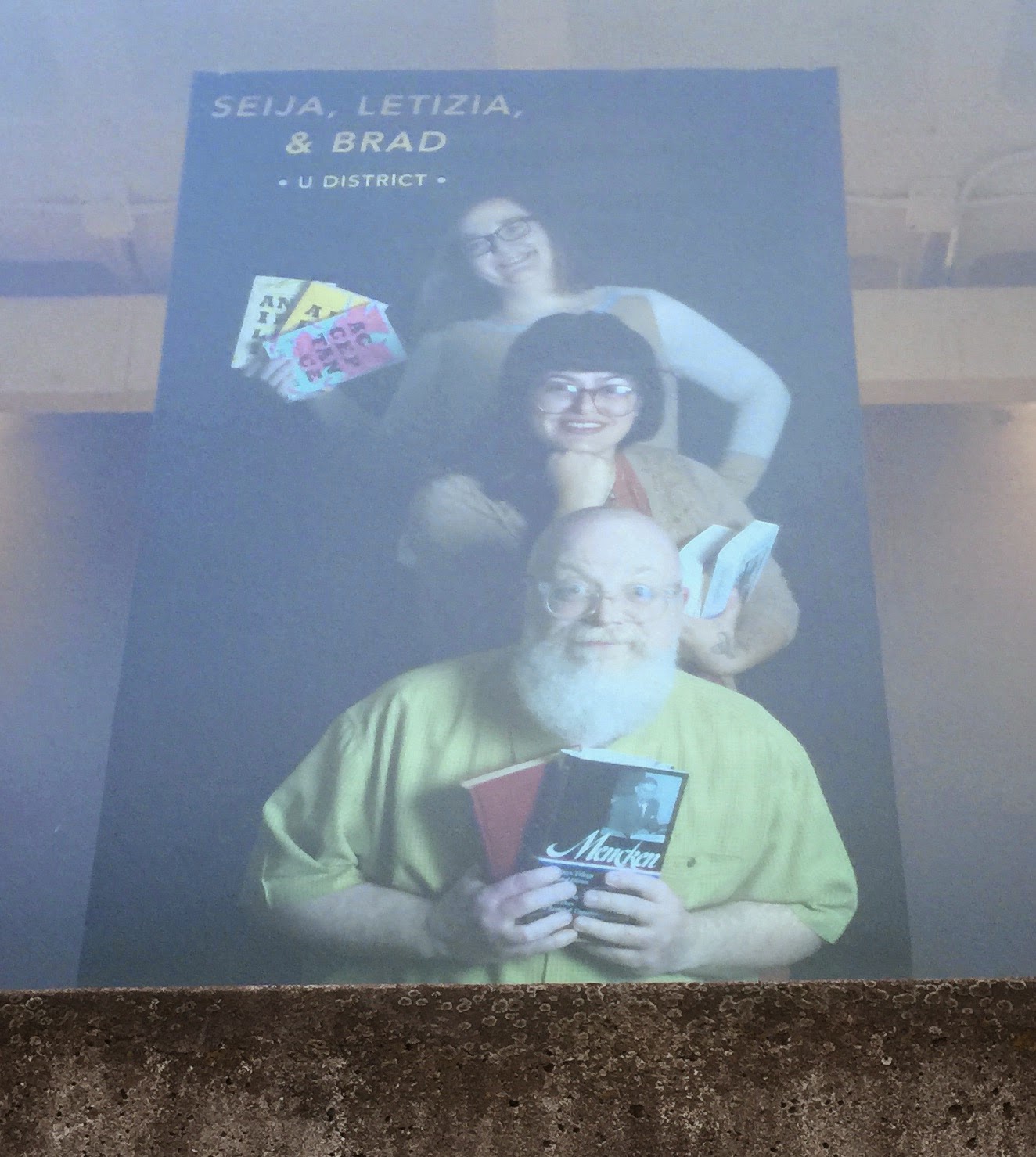 I rushed outside-- meaning I shuffled with purpose -- and there I was, in that damned green shirt, grinning out over the alley from the display window on the second floor of the bookstore.  The sun was on the glass, and that window's pretty high off the ground, but I could see that yes, I was in fact back in the window again.

What I'd forgotten when I forced the whole fiasco from my bald little mind was that mine were not the only photographs taken that day.  I'd also posed, at the photographer's request with two of my fellow booksellers.  Hadn't seen these among the pictures in the first file they'd sent me.  These, as it turns out, or this one at any rate wasn't so bad.  In fact, now I looked at it, I rather liked it.

As you can see, I'm the base of the totem pole.  Above me are two attractive young women.  We're all smiling cheerfully, and all holding books.  I've got the Library of America Mencken.  It's not a bad picture, is it?

I'd forgotten why the photo-shoot had turned out to be rather fun.  I had playmates.  I adore these women.  We'd all been a bit awkward to start, but then we'd tried various poses together, some more obviously unusable than others, and the photographer had posed us in some others.  We all giggled.  It was fun.

And now here we three were, happily displaying our Passion for Books from a second story window on the alley, grinning at the patrons of the bookstore's parking lot.  Well, believe me, worse things have happened.

I took a couple of snapshots with my phone and was glad the whole business had worked out after all.  I don't use the boostore's parking lot very often or walk down that alley, so I could finally, honestly and at last, not give the thing another thought.

Then I came in a couple of days ago and found this at my desk: 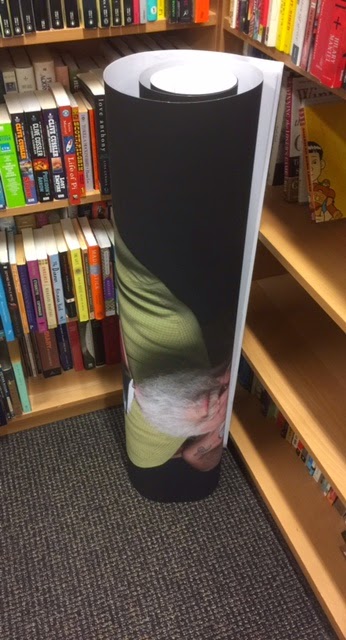 I can just hear the person from the Promotions Department telling the  woman who does the window displays, "Make sure you give that one to him when you take it down.  You know how he is."