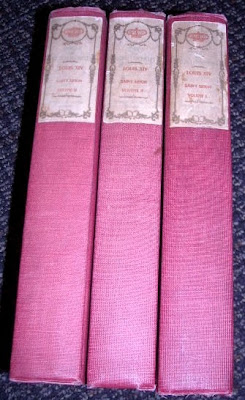 He wasn't witty, or even particularly good at telling a story. He never knew when to stop, or not to, just going on until he'd told it all, so far as he could remember.  He did have an excellent memory.  He also made a practice of writing everything down as soon as he possibly could after something had happened, or hadn't.  His style, as I understand it at least, only in translation from the French, was good.  He's said to have coined the word "intellectual" as a noun.  He wasn't one himself, mind. His book doesn't lend itself to quotation, anyway not unless one has already read it, or at least in it far enough to recognize some of the more familiar names, far enough to know something of the author's subject, his preoccupations, his place and his enemies.  Once one does, it's impossible not to smile when he's on yet again about this or that mistress of the king, some little scandal or violation of etiquette, like how the king -- Le roi de France, Louis XIV -- at some grand military exercise, had to keep taking his hat off and then putting it back on, not to salute the troupes, but in order to pop the royal noggin in and out of the window of the lady's litter to explain things and answer charming little questions.  Just as often, what seems most to exercise the writer is even more trivial; usually something to do with who should walk into dinner before and after himself, etc.  He had no secrets, certainly none he seems to have kept out of his book, though he otherwise appears to have been the very soul of discretion, if he's to be entirely trusted on that head.  In fact, his may be not only the greatest collection of tittle-tattle ever composed, but also, curiously enough, one of the most blissfully unexamined souls ever encountered in memoirs --and such a long book, too. 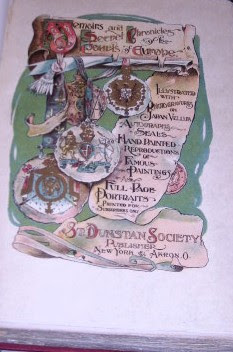 He was Louis de Rouvery, duc de Saint-Simon, -- or "the Duke of Saint-Simon," as his translator, Bayle St. John has it here.  He was godson of the king, a soldier, a diplomat, a courtier and resident of Versailles, and author of Memoirs of Louis XIV and the Regency.  Here's the three volume set, from a series of "Memoirs and Secret Chronicles of the Courts of Europe," by the St. Dunstan Society, Akron, Ohio, "Illustrated with photogravures on Japan Vellum" and so on.  1901, M. Walter Dunne, Publisher.  (I've seen other stray volumes in this series drifting around used bookstores for year, always in the red cloth covers, with the lovely old photogravure illustrations, etc.  This would be the first time I've actually thought of buying something from the series myself.)

Helene Hanff, in a letter to "84 Charing Cross Road," describes spending cold winter evenings, curled in her armchair with only dear, silly ol' Saint-Simon for company, and as always with my favorite reader and guide, craving more, bless her.  I do not doubt she was reading the translation of Bayle St. John, though not in an edition from Akron, Ohio, considering she got all her books from London by then.

I discovered so many books and authors because Helene read them first, just as she discovered most of what she read because Arthur Quiller-Couch, or "Q", editor of The Oxford Book of English Prose, among other things, read them before her.  Saint-Simon is one of these, though I've never really tried to read the Memoirs straight through before, never having had anything like a complete, or even a proper selection come my way before.  Now here it is.


Bayle St. John, curiously enough, is a name I only really came to know in the past couple of years, after the bookstore where I work acquired an Espresso Book Machine and I discovered a whole new way to search out obscure titles and have new, paperback copies printed up for me on the spot.  I'd read Sarah Bakewell's delightful book, How to Live: Or a Life of Montaigne in One Question and Twenty Attempts at an Answer.  I decided I needed to read another, more traditional biography of Montaigne thereafter and went looking for one, but never did find one.  Then I discovered Bayle St. John (1822 - 1859) on a search of the database of titles available for reprint on the EBM, and had his Montaigne, the Essayist, a Biography (1857) run up for me in two wonderful, thick, ugly little volumes.  It was everything it should have been for a biography of the period and I enjoyed every bit of it. 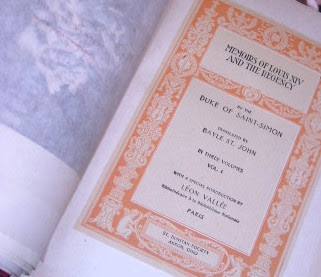 Now here's my old friend, Bayle St. John, again, this time the translator of Saint-Simon's Memoirs, that same Saint-Simon who kept Miss Hanff company one long winter in a cold-water flat in Brooklyn, thanks presumably to the recommendation of her teacher via books, "Q."  See how this works?

I hadn't thought to buy this three volume number, either to sell in the store or to read myself and had actually put it back in the bag it came out of, once I'd looked it up online.  We don't keep such things on the shelf at the bookstore where I work, or rather we don't anymore, at least not for any length of time.  The chances that anyone other than me would ever buy it seemed a bit risky as an investment, even of so little money, if more than an inch or two of shelf-space.  I kept reconsidering.  Then there was the fact that I am still trying to shed books, not acquire them just now.  Had to consider that -- if I was thinking of buying the book for myself, which I wasn't until I did.

I've been dipping into all three volumes for a week or more, ever since it landed on the desk.  I see the appeal now in a way I probably hadn't the last time I read Saint-Simon.  There's not the company of a friend and a philosopher, as there is in reading Montaigne, but there is the pleasure of a faithful correspondent from a lost time and place.  And Bayle St. John, the translator, seems to me every bit as reliably readable as Bayle St. John the biographer and essayist.  The world of  The Duke of Saint-Simon seems to be at least as interesting as that of Samuel Pepys, of whose diaries I've come to be more fond as I reach the age at which, I suspect, again, H. H. read them.

Long books to replace many briefer ones.  Maybe that's the idea.

Meanwhile I dip.  Some of Saint-Simon's stories, already seem to me to fall a bit flat, the joke perhaps requiring if not French, then something French in the way of sensibility, despite the yeoman efforts of the translator.  Likewise, more than once already I've found myself getting a bit impatient with absolutely ridiculous nature of life at Versailles.  (I've experienced a similar irritation reading about court life in Tales of Genji, where there was at least the chance of a bit of fencing.)  Still and all,  I can see the pleasure in visiting, if not for an extended stay.  After all, friends reccommened the place.
Posted by usedbuyer 2.0 at 2:14 AM