There Will Be One Vacant Chair 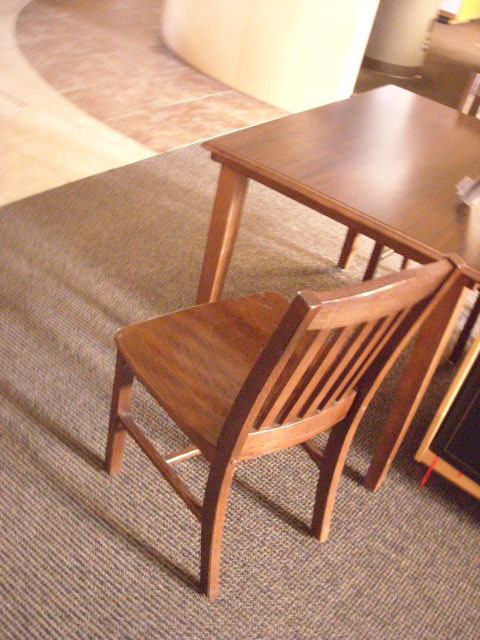 Addison says somewhere that friendship, by doubling our joys, divides our grief, or words to effect.  That's as may be.  I do appreciate a crowd now and then.  I feel the need of company, as most people do this time of year.  Somehow, what we now call collectively "the Holidays" just wouldn't be much more than shopping and eating and telephone calls, if it weren't for the excuse to congregate here and there when the cold comes on us, mingle a bit, sing maybe, or dance, laugh together, read a story aloud, pray or listen together.

As I get older, I find I have more friends than I ever thought likely.  Certainly who might be my friend has come as something of a surprise, I should think, to all parties.  Little children like anyone who likes them, mostly.  But unless one is very young, the expectation is that one's friends will be very like one.  Not true, I find.  Not true anymore, anyway.  But then, what I mean by the word has changed.

One has old friends, and if one is lucky, new.  A few years ago, I would have thought I'd already met my dearest friends.  I'm glad to say that I don't know that anymore.  In a broader sense though, I've come to believe that friends may be just where we find them or they find us.  Best not to worry about the when or the why of that, or, for that matter, when or why or where they might go.  Nowadays, I'll take my friends as I find them, and be glad of the company.

Recently, we lost a friend at the bookstore where I work.  He was a nice man and I miss him.  Here was an unlikely friend, may I say!  He read Jung, which I never will, and kept a dog, which I don't.  He  was an odd man, in many ways, and a melancholy presence of late.  His best friend, a dog as I've mentioned, died after they were every day together for many years.  That changed him.  He did a remarkable thing, years before I ever met him, and about that I knew very little until after my friend died.  I feel bad about that.  I'm afraid I wasn't very curious about his past.  The little I knew seemed enough.  (To ask too much of or about him seemed indelicate.  Perhaps I was wrong to think so, but I did.)  He wasn't the sort of person to talk much about what he'd accomplished and didn't look, frankly, capable of much but kindness and civility, and I liked him well enough for that.  Turns out, years ago, in the depths of the AIDS crisis, he founded the first needle exchange program in the neighborhood where I work, one of the first needle exchanges in the city for that matter.  It was an admirable thing to do and he did it; without permission from anyone and without being asked.  He saw that something needed to be done and he did it.  Imagine the courage to do that!

Here was a man, it seems, who had more friends, who made more friends in his short life, than might ever have been imagined to look at him.  He was unprepossessing in that way.  He was near to being homeless most of the time I knew him, and he was homeless for a long while there at the end of his life.  He walked other people's dogs as well as his own, and then after, and then finally, just the one.  He was always prompt to point out that that last dog, the last one to walk with him most days, wasn't his.  This was prompted by people, strangers, coming over to visit with the dog, not him so much.  He would always say, "He's not mine, actually," which usually confused people, and right enough.  What he meant, I now think, was a lesson, if that wasn't always clear, and something like a joke.  He had a sense of humor, my friend, that wasn't always easy to appreciate.  He had, however, a very easy laugh.

I wasn't much of a friend to him, really.  He certainly had better.  A woman I work with -- and one of the people I've come most to respect and love over the last decade -- was a good friend to our friend.  She took care of him to exactly the extent he would allow it.  She fed him when he'd let her, gave him a coat, a sleeping-bag, gave him money.  (Sometimes he'd take a little money from me, sometimes not.  When everything he had was stolen one day, our friend raised some money among all of us at the bookstore to replace what he'd lost.   He took that.  He was grateful.  Mostly though, we bought some of the books he found and brought in to sell.  We never took everything he brought in, but we probably took some that we ought not to.  I always thought he knew that and didn't much mind, though we were always very careful of that.  I don't mind who else knows it.  I paid myself for what I thought we couldn't sell.  No one lost anything by such small dishonesties.)    There are people in this world who will take care of us no matter what.  No use resisting such large souls, I find.

What she saw in him, I came to see myself: his own generosity, both in spirit and kind, his sincere affection for his fellow beings, his courtesy, which I've already mentioned.  That last is worth remarking specially.  It's not something that might be noticed otherwise.  Just the other day, we were talking about our absent friend at the Used Books buying desk.  He sat, nearly every day, at the little table just beside where we work.  He might eat his breakfast from the cafe, he might just doze, but he was there, nearly every day.  For years there was at least one dog dozing with him.  Then there wasn't.  Every day, coming or going, he wished us a good morning, a good evening, weekend or afternoon.  He never didn't do that.  Even when he talked, as he did more and more often lately, about perhaps not having the opportunity again, he always said hello and goodbye and wished us well.  He meant it.  That's the point, you see, that he meant it.

He was probably more than a little mad.  He read, I think now, to understand this about himself, but not just this.  He had a genuine and vitalizing curiosity about himself, his own mind, the very idea of mind, and soul, and his relation, however tenuous at times, to reality and to life.  He asked questions.  He didn't always ask relevant questions, but he asked.  More importantly he never didn't listen, whatever the answers.

We all of us might never have known, or even noticed such a person, had we not known him.  I admit it, easily.  We pass such people every day and express neither curiosity nor compassion as we go.  We are so very busy, most of us, going about our business; earning our living, thinking our own thoughts, worrying about whatever it is that happens to worry us just then.  We notice less than we might.  I notice less than I might, or should.  I'll say just that.

He, on the other hand, never ignored anyone.  There were, there certainly are, people far madder than our friend.  For a time, he might live with this or that insane person, he might avoid someone he knew to be violent or drunk or too desperately ill to be helped, but he would try, you see.  That's what made him such an extraordinary person, rather than just another character on The Ave.  He wasn't a saintly person.  He wasn't a fool.  He had a temper, come to that.  He would not tolerate cruelty of any kind.  What he did do -- and this was truly remarkable if not entirely unique in my experience -- is he would try, he would listen, if at all possible, he would try to help.  He believed in kindness.  It wasn't just a matter of manners for him, or of trying to be kind.  He believed in kindness.  It was, I think, his only absolute.  It was the one thing he still had when he hadn't anything else.

Addison said that friendship doubles our joy by dividing our  sorrows, or something like.  I don't know what joy there was left in life for our friend when he took his own.  I can't know his sorrows.  He told another friend, when the last dog he walked rather suddenly died recently, that he hadn't anything left to take care of.  That seems reason enough, or at least seems it seemed reason enough for him.  In his own modest way though, he took what care he could of us, of all his friends, working and poor, homeless and housed, sane and less so, good and not.  Whatever rest he's found, he earned.  He might have let us take better care of him, but that's nothing he need have thought of when he came to the end.  That's our sorrow, not his.  He did enough.

When I read a story aloud tomorrow night, to mark the coming of Christmas, to give what pleasure I can to such of my friends as may be about me then, there will be one vacant chair.

The loss will be mine.

Rest in peace, my friend, our friend.  I will be thinking of you.