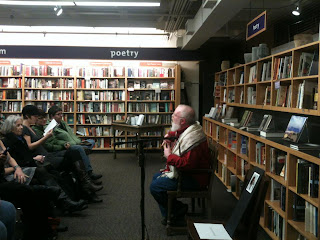 Well, that's another done.  It's still an amazement to me that there are ever forty people, many if not most of them strangers to me, willing to come sit of an evening and listen to me read aloud.  (Half an hour or so before every reading, I'm always passing back and forth -- on very important errands you may be sure -- and checking the empty seats.  Often as not at that hour, there may be one elderly gent dozing cozily over a book, but not a hint otherwise of anything that might be called "my public."  It's right about then I start to "glow" with anticipatory flop-sweat.  So attractive.)

As you can see, people did, in fact, come out out to hear Capote's A Christmas Memory, bless 'em.   In addition to friends and former coworkers and the like, I had friends up from California this year, just to hear the reading, which was terribly flattering.  Since my dear friend C. has been transformed, at 54, into a 14 year old girl by his new-ish smart-phone, he now texts and takes pictures all the time.  (It's really rather charming, as it turns out, having a teenager to stay over Thanksgiving, but a teenager who drinks responsibly and picks up the tab on an expensive dinner for four at Salty's.)  He took the picture below: 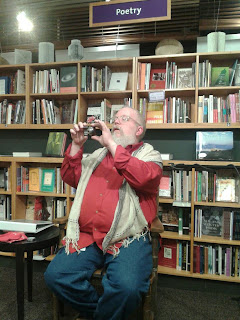 I'd decided that as he was not even the only one taking my picture, that I'd take some of the audience as well, a la Moby and the like.  Rock star!  (I got more than one compliment on my holiday outfit, by the way.  Thought I was stylin' pretty good, until I caught my reflection in a dark window.  Decided I actually looked like an Hasidic tomato.  Oh well.) 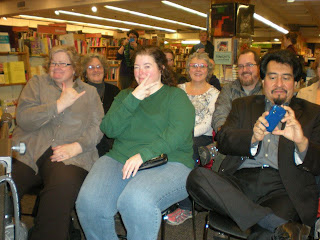 The audience, as I've said, was full of friends, old and new.  Some of them even had the genius idea of bringing their friends as well.  Excellent idea, may I say. 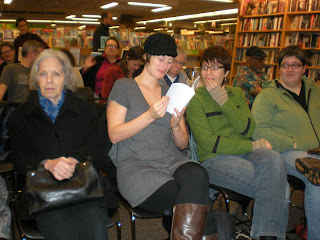 We'd had some copies of my little book printed up, to sell at the event, though my book had absolutely nothing to do with what I was reading.  That's what these women are up to in the photo above, pretending shock at my daring and dazzling wit.

The Capote went well this time, if I do say so myself.  (Someone pointed out that last year?  I was desperately ill with a spell of the vertigo the night I read.  Maybe that's the formula then; alternating sick and not, so that every other year at least sounds frankly better than I've "ever been.")  Afterwards, a number of regulars did make a point of saying how much they'd enjoyed the reading: the Capote of course, but also the Ogden Nash poem with which I'd closed the evening out. 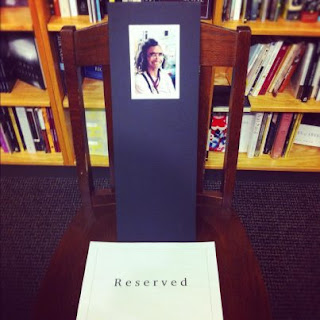 And then there was this.  The piece I wrote last night, I'd intended to just be a brief introduction, as I do every year.  Usually I talk a bit about the history of Capote's story, and my own preoccupation with Christmas, reading literature aloud and whatnot.  I'd decided to dedicate tonight's reading to Bob Quinn, a friend to the bookstore, and someone we recently lost.  Bob was always good about supporting my efforts at the store.  Seemed appropriate then to open the evening with a few words about Bob.

Well, the piece rather got away from me and ended up being considerably longer than I'd anticipated, more of a eulogy as it turned out, albeit a rather narrowly defined and very personal eulogy.  That was fine for what it was, as an essay here, but was it something I wanted to read aloud, at the bookstore, as part of a Christmas event?

As it turned out, yes.  I debated this with myself for a long time last night and again pretty much all day today, right up until it was time to get ready for the reading.  I'd prepared a second story, a funny one.  That's what I will usually read, something very light, to follow after the melancholy final note of A Christmas Memory.  (Back into the file for next year.)  But the thought that Bob's actual memorial, long if haphazardly planned, has yet to happen, and that anything I might have to say may not be appropriate to that more solemn celebration, I determined something more than just mentioning the man's name really was called for.  My next thought was that I might still edit last night's piece down to something more manageable in length and still have time for a second story.  Could not make that work.  Finally had to make a decision, so I did.  I read the eulogy.  I closed with a funny Santa Claus poem by Ogden Nash.  It all worked surprisingly well, despite my nervousness at reading what I did.

Dear P., my boss and fellow reader on more than one occasion, insisted that the Capote reading this time was the best I'd ever done. I mention this compliment because I really rather like her explanation of why that might be true.

"Your heart was already open."