They Near Read the Heart 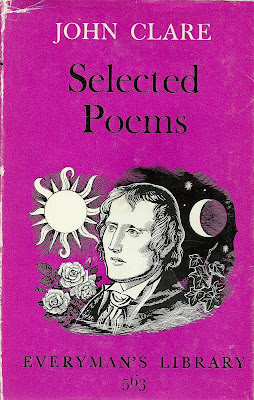 So... here's how this works, sometimes. A major new biography comes out; one of those massive, somber numbers, a life's work of scholarly research and reevaluation, and with it, a newly annotated and complete edition of the work, and... press ensues, even in unlikely magazines and seemingly overnight the world is full of... well, John Clare. This happened just a few years back. Call it perversity, but all that attention, and those great big books, put me right off him.

Now, I knew Clare a little from plunging, finally into the Romantics, by way of Charles Lamb, after many years of not taking much notice of the period. When I was a strapping lad of pronounced if completely received opinions, and still much influenced by the spiteful Moderns, I admit, I found the Lake Poets all rather soppy and hadn't much patience for daffodils and long, noble hikes. When I came to read Lamb's amazingly rich and nutty letters, in addition to the essays, etc., the good peasant poet, Clare, came up now and again. His contemporaries would all seem to have rather liked him, even admired his talent, but it was all a bit condescending and droll, and tinged with pity. Poor Clare, was the refrain, poor, sweet, "Swamps of wild rush-beds" loving Clare; the little, ill-educated farmboy, at just a rickety five foot high, made mad by poverty and too many mouths to feed, clapped up for twenty odd years in the madhouse, right to the end, thinking he was Byron & Shakespeare, both!

I imagine I liked the one poem in Arthur Quiller-Couch's Oxford Book of English Verse -- therein titled "Written in Northampton County Asylum" but better known now as "I Am." Later still, when I came to find the great pleasure and constant education that is Auden's Poets of the English Language, and the volume of Romantic Poets: Blake to Poe, I found Clare getting more his due, and liked him still, but he made no startlingly new impression. One more "Autumn" more or less, "The Frighten Ploughman" and the rest not being enough to send me after more.


But then, after Savage Landor and Byron woke me up a bit, after Moore, and finally Wordsworth and Coleridge and yes, finally after Blake, and even Crabbe, I've come at last to love John Clare. Why?

Well, the volume of The Everyman's Library pictured above, came to hand one recent evening in a used bookstore where I was killing time because my road home was backed up, yet again, by some typical Seattle disaster like a light rain or what have you. First I saw, from the same publisher, same edition and era, a nice copy of Thomas Gray Poems, With a Selection of Letters and Essays . Now Gray I'd already cottened to, again by way of letters. And in the bin, also waiting to be shelved, right next to that, was Clare. Each book but seven bucks, and nice, clean copies, as we say in the trade. Why not?

I think that these editions of the Everyman's Lib. are the ones I like best; English and post-WWII, but no later than the late sixties, after which the books get flimsier and less fine. I like either the uniform, numbered covers with just a lyre and quill device on the jacket, for the poets, or better yet, like the Clare, with a stark, three color graphic of what's meant to look like a wood-cut or a litho in black and white and incorporating the bold, background of pink, or yellow, or what have you. I think I like those best. For example: there's John Clare, looking dreamy, with the sun & moon to either side of his big head, and roses and ivy likewise, just to clue the dim reader properly in. Yes, these are the prettiest, I think. Beyond that, like all the Everyman's Lib. I like, there are good, solid introductions, but not too long, and proper notes, and a bibliography or two, but nothing ungainly, and all of it compact at 4 inches by seven, and well-made and lasting.

So only now have I, for whatever reason, finally found a Clare I can carry around in a pocket and take with me from room to room or even -- gasp -- out for a walk. That matters. Poets shouldn't require a dolly to be moved. (Maybe why I still can't quite make the effort of Milton?) I liked the look of Clare now, you see, and so I took him up, and for the first time I read him as, lately I'd read Cowper, and not so long ago the longer poems, first of Keats -- mostly -- and Shelley, believe it or not, nearly whole.

Clare read finally from the introduction by his mid-century biographers and editors, Anne & J. W. Tibble (!) on past the middle of the little book finally has come to be something of a revelation. He is angry, often, and unsentimental (see "The Badger") and he isn't just the quaint little ghost that I was misremembering.

"The parish hind, oppression's humble slave,
Who's only hope of freedom is the grave"

That the opening of his unfinished satire, "The Parish," page 140 of this edition, that speaks to the bitter truth of the life as lived by "Poor Clare!" This is not some delicate-chested rustic, scribbling away, one elbow on the plough.

More though than this, there is the very real power of the "native scenes," both domestic with his "Mary," and of the afore mentioned badger, of beggars in the road, and yes, hay-ricks and harvests and woods, but also want and aspirations, skepticism and judgement of what may be Fate or God, or just the mixed luck of being brilliant, kind, ruined little John, in one borrowed cottage after another until, finally, he goes, voluntarily, much like my beloved Charles and or Mary Lamb, off to some sad place, for fear he does more harm than good. For Clare, with six living children, and no one among his admirers to keep him any long time from starving, how not to go mad?

And so I've spent more evenings now than one, alone in my chair, saying out some poem of Clare's, some perfectly made small, square thing, some closely observed and no less deeply felt for being often simple poem. And so to quoting them here, and reading them aloud to put up for others to listen. (These readings being specially unpracticed, but what of it? I hope at least some sense, and a little of the haunting music of even these lesser things might spur someone out there to find themselves a Clare and read, or even read aloud.)

As for the massy weight of more recent, final and official editions of the poems, or that great big life, I don't know that I'll ever bother much about those. Discouragingly important looking, hence not so much to my taste. Maybe an official Oxford edition, someday, if I find it cheap? Something to look for. Meanwhile my little Clare is enough for me. It's enough, just this first snatch of a Song, I think, to make me love the man, and keep on: