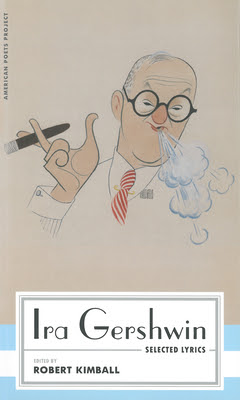 The more I read the papers,
The less I comprehend
The world and all its capers
And how it all will end.

My preference, particularly in poetry, has always been for light books. I am grateful for every massy Oxford or Cambridge edition that can provide me with as near a complete collection of a poet's work as can be printed in one volume. When I want something from Blake or Byron, without quite remembering just what it is I want, such comprehensive volumes can be counted upon to have it, have it indexed at least two ways, and to have it whole. Hunting something online -- a misremembered title or a simple quote, a famous passage or poem -- even now can't provide quite the same opportunity to not only read but read around, rummage, read on. Questions addressed to even the most comprehensive database still require a specificity that books don't; one can't yet trust a website, even the best ones, as one still can a long dead Cambridge don, to anticipate only what may be relevant to the reader. One can get lost online in the web of connections. With a book, getting lost is still a happy accident. But even the slightest of the "Oxford Standard Authors" tends to be too weighty, with footnotes and endnotes, with indices and introductions, variants and alternate endings, with just the sheer volume of poems, to be comfortably carried on the bus.

It is widely accepted nowadays that poetry, at least such poetry as has survived the poet, is too cumbersome a thing to be carried. There is an obvious irony in this, but if only encountered in classrooms in the shape of fat Penguins or the brick-weight of a Norton Anthology, can anyone wonder that the great poets intimidate the student and the casual reader, if not by their style or themes, then by the sheer size of their "Collected Verse?" Few poets before or since Milton have assumed a reader willing to lug a whole oeuvre to lunch. The economic realities of publishing even Lovelock or Gray in anything less than a complete edition, likely to be used in a class, make most publishers shy of "selected verse." And with few exceptions such as Dover Publications, any hope of seeing a single book in the form in which the poet published it is slim.

The publishers of contemporary poetry tend to abide by the poet's wishes -- so long as the poet's alive -- and continue to produce books of a traditional length, though even these would seem to be, in a way, just the necessary preliminaries, if the poet is lucky and lives long and productively enough, to the "New & Collected" that seems to mark the true arrival of a poet as an established voice in today's diminishing marketplace. (Such collections tend to not always be all they might seem anyway, as even the slightest recycling, with additions, can be and all too often is so called. I'm sorry, but six new poems and two brief books bound together does not always a new book worth buying make.)

But there are some, admittedly often subsidized, presses still in the business of making handsome selections of poetry. If I'm going to read poetry at a bus-stop, or under a tree, or while eating a burrito, what's wanted is a book I can hold with one hand; a sturdy little thing in hardcovers, in a clear printing, that can in this way be kept out of the rain or free from splashes of hot sauce and slipped, while walking, into my pocket. I am too hard on paperbacks and don't like that sickening snap when one is held flat. I want my books to last me. I intend all my books to outlive me. The Everyman's Library Pocket Poets are ideal for my purpose. True, I've mentioned here before the frustration I've sometimes experienced in reading these when I might have need of the notes they never have, but bigger, better books can be consulted at home. For a walk on campus to see the cherry blossoms -- come too early this year and so all the more precious for being in constant danger of ruin by a return of winter -- a small book of poems is required.

For me, one of the real pleasures of the American Poets Project has been the eagerness with which the editors have embraced this principle of mobility. Unlike the editors of their more substantial sister publications in The Library of America, the makers of the more modest series have made no claim to preserving the American canon. Instead, the American Poets Project has consistently produced affordable, attractive, slim volumes of selected verse, none running beyond two hundred pages, and all of them suitable for reading on a walk or in a hammock.

In addition, each volume to date has been as likely to introduce me to poems and poets I do not know as to afford me a portable copy of them as I do. In what is their best feature, each volume is judiciously selected and edited by a writer, more often than not a poet, but as likely a biographer, not only well acquainted with the poet memorialized, but eager to find new readers for the work. The results have been consistently good; with short, clear introductions, representative, but sometimes surprising selections, and always good reading. What better way to appreciate Whittier than with Brenda Wineapple or Amy Lowell with Honor Moore? Some editors have been as surprising as their poets: Richard Wilbur choosing Poe, or McClatchy doing the selection of Edna St. Vincent Millay, happy meetings both. In at least two instances that come immediately to mind, this series has also introduced me to poetry I may never otherwise have known, and the introductions were made by trusted writers, both of whom have subsequently died. What a precious thing it seems now, to have had Thom Gunn introduce me to Yvor Winters, and the late Louis Auchincloss to show me the unsuspected poems of Edith Wharton!

I can't say that I've responded to every volume with equal enthusiasm, of course. I have a friend better-lettered in poetry who never could induce me to take up one of his favorite, Louis Zukofsky. Being a completest though, I had to buy the volume of Zukofsky published in the series and my friend may yet be shocked to learn that, yes, I even read a poem or two. Editor John Hollander's selection for his American Wits: An Anthology of Light Verse baffled me a bit, as I've never read such a book and smiled less. (Though I am still indebted to Mr. Hollander for his Emma Lazarus.)

And one specially brilliant idea in this series has been to invite Robert Kimball to make a volume each of the selected lyrics of first Cole Porter, and now Ira Gershwin. Kimball is a scholar of the American musical songbook,with volumes of the complete lyrics of Gershwin, Hart, Berlin and Loesser to his credit, among other books. Such things are by their very nature unreadable as books, designed for reference, formatted to sit on a table or a music stand, to be flipped through happily, at home. But in his two little volumes to date for this series, Kimball has been given the impossible task of selecting just a few dozen of each lyricist's best. Of course there are missing favorites, and some songs included, presumably, for historic rather than artistic interest, which is a damned shame in such a narrow space, but this does not much matter as both books are full of such sparkling light verse, such wonderfully American beauties that it seems churlish to complain.

I stand more than a little amazed that so little notice has been taken, even in the bookish world, of the publication just last year of Ira Gershwin: Selected Lyrics. Think of the excuse provided for familiar quotation! (See above.) Unlike Cole Porter, who did what he did all but on his own entirely, or even who I hope will be the subject for Mr. Kimball's next contribution to the series, Lorenz Hart, Ira Gershwin tends to be remembered less well than the composer for whom he wrote some, though by no means all, of his best lyrics, his brother George. When the average person hears the name Gershwin, it is probably music that comes to mind. I don't know, from the very good joint biography of the brothers Robert Kimball cowrote, but that Ira Gershwin would himself approve that this is still so. But whatever George Gershwin's place in the pantheon of American composers, this little book of Ira's selected lyrics may be said to go some way toward recognizing an admittedly, at least in comparison, minor, but no less joyous genius in the lyrics of "the other brother."

Great song lyrics are rightly inseparable from their tunes, and I make no claim, reading Ira Gershwin's, that in some corner of my skull there is not at least a familiar, rhythmic hum. But I do not know the tunes for every piece included here, and even in the many that I know nearly by heart, there are often surprises, often in the little sung verses, that can not but make me marvel anew at Ira Gershwin's facility for deflationary wit. Witness this bit from the end of the too little sung verse from the much recorded song, "But Not For Me:"

"I never want to hear
From any cheer-
Ful Pollyannas,
Who tell you Fate
Supplies a mate --
It's all bananas!"

Or even in the second refrain of the equally famous "Let's Call the Whole Thing Off," written for Fred Astaire, there is this final twist which I find I never fully appreciated until I read it:

"For we know we
Need each other, so we
Better call the calling off off.
Let's call the whole thing off!"

Beyond the ingenious syncopation of that last, there is a a verbal sophistication that while never dependent on sophisticated vocabulary, turns with all the speed and grace of a vintage Lincoln.

That is what this little volume of selected lyrics I've been carrying around with me has made me appreciate about Ira Gershwin's, and by extension all the great American lyricists of the first half of the last century, unique contribution to American light verse; not just swing, and wit, but a very elegant democracy, an accessible yet intricate use of commonalities to express complex ideas and emotions as well as rhythms. If American popular music lost anything in the years between Ira Gershwin and Hip Hop, it was that sophistication.

I could keep on quoting, but I won't. The American Poets Project, and Richard Kimball, have made such efforts unnecessary. You've only to buy the book, and maybe Ella's Songbook, to appreciate the pleasures I've suggested briefly here.

I can't resist closing though, as I began, with one last bit from Ira, just to remind us that he wrote verses, not so much verse, though clearly, he did this better than many a more respectably literary man in something of the same line. So here, from "Words Without Music:"

"I'll hear words without music
All my life long --
Hoping, praying
That what he's saying
Will turn to song."
Posted by usedbuyer 2.0 at 11:39 PM