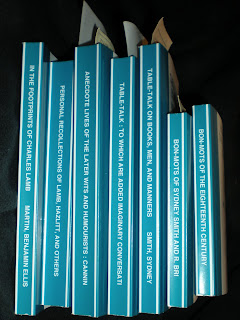 As a friend noted here recently, I have indeed been getting "giddy" at the prospect of finally getting my own copies of some rare and out-of-print titles, via the bookstore's Espresso Book Machine. In my keenness to read more Sydney Smith, more Maria Edgeworth, and find rare Eliana*, I have already hunted up and caused to be printed more than a dozen Google books for which I may safely assume I will be our only customer. (I am proud to say, we've already sold at least one EBM copy of Hazlett's essays, so not all my title-suggestions have been selfish. Most, but by no means all.) In fact, it is already proving difficult, if not impossible, to not request copies every day.

One of the unanticipated drawbacks of the format of these library reprints has been the unreliable information on each in the listings of available books. Frances Anne Beaufort Edgeworth's A Memoir of Maria Edgeworth: With a Selection from Her Letters, turned out to be only volume one of that work, ending in 1817, which hardly tells the life, as Maria lived until 1849! Well and good had there been a listing for the second volume. There ain't. Likewise, Anecdote Lives of the Later Wits and Humourists: Canning, Captain Morris, Coleridge, Lamb, Mathews, Tallyrand, Jerrold, Rogers, Albert Smith, Hood, Maginn, Thackeray, Dickens, Poole, Leigh Hunt, Father Prout, Etc., by one John Timbs, F. S. A., Author of A Century of Anecdote," in the edition newly made available again, turns out to be only the second volume of the work, starting with Tallyrand. Now, beyond the questionable inclusion of Coleridge among the wits and "humourists," the obvious problem is that I wanted this book specially for the Lamb material, and he, with his friend Coleridge, is in the missing first volume! Again, no record of the other volume having been scanned into the available database. (Or any sign of Timbs' earlier, and evidently successful "Century," for that matter.) Then there is the misleading practice of putting a single author's name to an editor's anthology of many such eminences, such as Table-Talk on Books, Men and Manners, "by Sydney Smith," as the title was listed, but which turned out to be part of "Putnam's Semi-Monthly Library for Travellers and the Fireside," from 1852, edited by Chetwood Evelyn, whoever he might have been, and actually subtitled in the text, "from Sydney Smith, and others." Sydney's in it, but it's not just him in there. This last error may have been the result of Smith's name appearing on the title page in type twice the size of the otherwise unmemorable Chetwood Evelyn, but still, there really is no excuse for getting this so very wrong.

What's become increasingly clear is that, in the gargantuan undertaking by Google to digitize the whole of the contents of the world's libraries, there has been not a whit of quality control or editorial oversight of the results. Sadly, I've already been forced to accept the fact that these Google books, at least most of the ones I've wanted, are made from disgraceful old library copies, and it's only too obvious that even the likes of The Harvard Library allow their old books to be treated no better than the Turks treated the Elgin Marbles, that often as not these copies tend to be filthy with annotations, underlining, dirt, discolorations, and all the usual library-defacements of stamps, and pockets and the rest. Oh, well. Beggars, etc. (If I could find or afford good, clean, used copies of the books I want, I wouldn't need reprints, now would I?) Likewise, I've accepted the fact that the actual scanning of the books into the computer, based on the regular recurrence of copied thumbs, and in one book so far at least, a whole hand! was evidently done by untutored, manual, migrant labor (those recorded fingernails look none too clean to me, though that may be an effect of the printing.) But to produce one volume of two without explanation or apology! to put the wrong title to the book! or substitute for the author a name from the text?! Well, now that's just fucked up.

That I may be making such a fuss about books no one seems to have read since the Coolidge Administration, I think, rather misses the point. True, the taste for multi-volume collections of private letters and reminiscence of barely remembered writers and bon-vivants of yesteryear or centuries past bespeaks a certain eccentricity of taste, but really? ! Not one clean copy anywhere to be copied by Google of The Essays of Elia? Could the only edition available to these drones really have been the Universities of Michigan's wrecked copy of The Everyman's Library reprint of May, 1915, replete with ticks and underlining?! Harrumph.

Still and again, for most of the titles I've purchased in this format, I must take what I can get. And please do not misunderstand me, grumble as I might, I am thrilled to have these books, even the ones that have proved to be not what I thought they were, not by the author listed, or, unlike Lamb's "Elia," not much to speak of as literature.

Perhaps I do owe the reader some brief explanation of just what the majority of these little treasuries assembled by the likes of Walter Jerrold, Timbs and Chetwood Evelyn have actually proven to be. Whoever the editor, and whatever the sources, the bon-mots and anecdotes collected, when not, alas, punchlined in Latin, as not infrequently seems be the case, tend to rather hoary jokes and puns, recorded in the newspapers, diaries and memoirs of days gone by, and preserved to justify the reputations for wit of once famous or infamous celebrities of the time. Not everyone remembered herein for their conversation or their quickness is otherwise memorable, but then not everything preserved in these books deserved to be. But for every pedantic divine or snarky lawyer, dyspeptic judge or snobby society dame, there are to be found in every one of these collections some of the best, light or lacerating things said by the better minds of many generations of English writers, rakes, statesmen, enemies and friends. Think of all the best bits quoted in what might otherwise have been a boring biography. Think of the stories we all still tell on family members and friends, years after. Think of nearly every word that dropped from Oscar's lips. That kind of thing. Not all the "wit" collected in this kind of old-fashioned, conversational almanac really is. Not every story is full of epigrammatic brilliance. Far from it. Much in these books could not crack a smile anymore. But where else would I be likely to find something like this, from Jerrold's Bon-Mots of the Eighteenth Century:

"An impertinent young fellow, dining at the same board with the learned John Scott, suddenly enquired of that worthy what was the difference between Scot and Sot.
'Just the breadth of the table,' promptly answered the other."

Table-talk, surviving usually because the person speaking was already Doctor Johnson or the like, tends to come at greater length, and to touch on more serious subjects, but the intention is the same: to preserve a record of the best conversation, save some memorable or specially sharp observation. The Table-talk of someone like Leigh Hunt, may have been every bit as rehearsed as a contemporary comedian's monologue, or table-talk may be as loose and camp as what we have of Auden's, but as minor literature, it is still a wonderful way of feeling in the presence of such exceptional people, and reading such stuff without the more usual biographical packing can be a delight, as well as a delightful reminder of why such writers wrote so well.

And Finally, the anecdote is the briefest biography; the telling incident that sets before the reader, in a flash of wit or a characteristic moment, a most memorable likeness. Imagine meeting some idol of today, some writer or actor or politician, and then imagine such a one capable of saying something memorable. Could happen. Did. In the days of letters and diaries, such things tended to be recorded and kept, rather than broadcast and forgotten. And friends, recognizing the interest others might have hereafter in what their more clever or accomplished friends said or did, didn't post three minute videos of a party on Youtube, but went home and wrote the experience up. Imagine.

I love the best of this kind of thing because it allows me a glimpse not just of my favorites and literary familiars, but into their social circles, their times, and their minds. And such rusty collections as these can also be the means of sending me off to find more and better from those to whom I've only just been introduced. I'm reading what I can find of Sydney Smith, for example, because I've met him happily so many times in company.

So whatever the state of the copies, I'm glad to have this unexpected access to originals.

*An adopted term for all hitherto unknown to me books by and about Charles Lamb, author of The Essays of Elia.
Posted by usedbuyer 2.0 at 10:46 PM