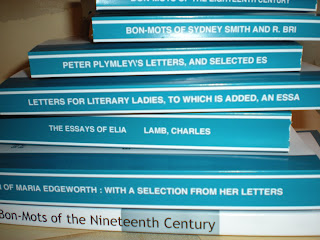 And so here, the sum of my enthusiasm to date. Homely treasures, the lot, but how else am I to have them? Were I to go hunting on abebooks.com, how many of these would I find? Few enough. Could I afford them yet in better copies? For the most part, no.

I started, of course, with Elia, just to see it, and to have it, in just such humble dress, to hand. I will not keep it long. I have in mind already the reader for it. A better copy of such an unfamiliar book might suggest an obligation to read the book for my sake, and that is no introduction for such a book as this. Amusement can not be obliged. Besides, in a way, Lamb might have read, might have owned, just such a copy as this. The books he lent or gave to friends could be in notoriously sorry shape. So I have marked "A Bachelor's Complaint of the Behavior of Married People, " with a reader, as I've said, in mind but with only the idea that this might make him laugh. What better way to meet a new friend then that, by way of a friend and as an invitation to further familiarity?

For myself, I have Lambs a'plenty; large and small, some pretty, some plain, most old though not all so old as my favorites; "But the general beauty of them all, is, that they are all so perfectly characteristical."

I could easily do as I have done before and find a pretty stray for my friend, amongst my own, or in almost any used bookstore in this or any city, but I am content with this copy, copied thumbs, marginalia and all. Having this Lamb, not found, but called first from the fold of the bookstore's new Espresso Book Machine, may, for a new reader, lend it a novelty absent in a better edition. This has an interest in it's origin that may provoke a greater curiosity about its contents. That's my thought anyway. Meanwhile, I could read a little of this one at the desk.

"Some Sonnets of Sir Philip Sydney," I read again today, and wished I had even a little Latin left in my head.

Looking for Sydney Smith yesterday in the listing of printable, out of print books, I found his Peter Plymley's Letters and Selected Essays. Round about then, came Walter Jerrold's quaint little conversational collections: Bon-Mots of the Eighteenth Century, and Bon-Mots of the Nineteenth Century, ("With Grotesques by Alice B. Woodward," as I see on the title page designed by same for each,) the latter of course featuring the witty Rev. Smith. But I discovered these only after having found, just yesterday, a listing for the same editor's Bon-Mots of Sydney Smith and R, Brinsley Sheridan ("With Grotesques by Aubrey Beardsley"!)

And these lead back to Lamb, as Walter Jerrold is the grandson of Douglas Jerrold, the wit and playwright and Lamb's friend!

Finally, to add to the Edgeworth I mentioned here yesterday -- and read with such pleasure last night -- I have now A Memoir of Maria Edgeworth with a Selection of Her Letters, by the late Mrs.Edgeworth (Frances Anne Beaufort Edgeworth, who I take to be Maria's sister-in-law, and edited by her children, this little book being, I only now realize, but volume one of two, at 325 pages! Now, can I cause to be printed for me tomorrow, Volume Two?)

I do realize that all the above may well sound perfectly pointless gibberish to most. Lamb and Edgeworth have between them few enough readers nowadays, the Jerrolds none to speak of, and Sydney Smith is known now, if at all to the general reader, only in issolated quotes.

But that's the point of the fabulous new machine, don't you see?! With the exception of Lamb, I have, besides her novels, read but one or two things of Miss Edgeworth's before now, and in everything but his letters, met Sydney Smith only in other people's books rather than his own. Grandpa Jerrold is still to me but a character in Lamb's letters and biography, his grandson I never knew before today. I may now correct all this. Now, thanks to our new EBM, I can at last begin to gather just such loose threads as these, and knit up some of the gaps in my reading. Wits I have heretofore only met in passing, I may now know better, and when I wish, because in these ugly little Google books, I can draw them out from the libraries where they've been forgotten, and take them home with me. More, as with The Essays of Elia, I can introduce these to new readers, and make them, hopefully, new friends. (Already, from last night's post, one of my oldest and dearest friends has asked to meet Miss Edgeworth, "the Irish Austen"! Done.)

I can not keep myself from darting from my desk, and my duties, with "new" titles in my hand, to the EBM. I find myself enthusing to the least likely people in the bookstore about the wonder of the thing, and scheming to buy cheap copies for friends of not just my favorites, but of books one friend might need for his research, or of books that another friend may want for no better reason than because the title made him laugh!