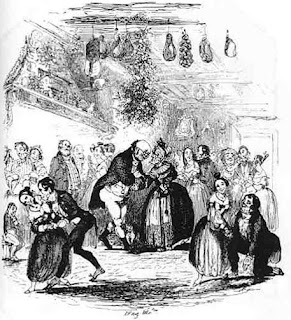 I can, in all modesty, tell you that I may well have read, in just these past few years, more Christmas stories than any adult now breathing. The necessity of this has come not so much from any special fondness I might once have had for the form or subject, but from the need of an encore for my annual reading aloud of Truman Capote's A Christmas Memory at, among other places, the bookstore where I work. Truth be told, I do not much like most Christmas stories. I did not in fact know just how little I liked them until I had need of good ones. I would say now, based on the dozen or more anthologies I've read through, to say nothing of the stories I've downloaded, the novels I've hunted in, etc., that there are few subjects in literature that have consistently produced more falsity, hackneyed sentiment, lazy plotting and just plain bad writing than Christmas. And not just from hacks, mind, but from otherwise respectable, even great writers.

Dickens was described not long ago as "the man who invented Christmas," and while this is not all together an exaggeration, it might more truthfully be said of the great novelist that he did invent the successful Christmas annual. In addition to the Christmas stories he wrote and ran in his own magazines, and what came to be his yearly publication of a longer Christmas novel, beginning with A Christmas Carol and continuing until his premature death, Charles Dickens did much to make Christmas profitable, not only financially but morally for his time and all the time after. There was already some tradition of publishing holiday goods at Christmas time, special numbers of popular magazines, books written and produced for what even then was seen as "the Christmas market." Addison & Steele, for example, more than a generation before Dickens, made a point of putting their "Spectator" in the company of his endearing country friend, their admirable, and already much beloved character, Sir Roger De Coverley, come Christmas. But it was Dickens, more than any who'd come before him, who made the Christmas story, rather than the Story of Christmas, into a popular tradition and into a lasting body of literature.

Nearly all of Dickens' contemporaries and imitators followed him in putting presents every year beneath the tree, though none, including Dickens himself, ever quite matched the lasting power of the "Carol." Dickens' greatest rival, William Makepeace Thackeray, commented with considerable justice and admiration, and some frustration, on that immortal story, saying "Who can listen to objections regarding such a book as this? It seems to me a national benefit, and to every man or woman who reads it a personal kindness." Thackeray's own Christmas Books, while occasionally delightful of themselves, are not a patch on Dickens. Neither, for that matter, are any of the Christmas stories produced by Trollope or any other of the great English Victorians. (Mrs. Gaskell, particularly in her return to Cranford for the holidays, comes closest, though in a very different vein, to having made Christmas a natural part of her fiction rather than just a convenient and commercial setting for her more usual writing.)

For those writers who came after, from Stevenson and Chesterton and Saki in England, to Bret Harte, Sarah Orne Jewett and Louisa May Allcott in America, and on down to the writers and contributors of The Saturday Evening Post and the New Yorker, the writing of a Christmas story, or even a Christmas book, has continued to be something of an expected, and lucrative, part of popular literary success. In our own times, figures of such diverse literary reputation as John Updike and John Grisham have tried their hand at it.

Why? I began to ask myself that question, after reading so much less than satisfying fiction on the theme. Why should any talented writer, for any reason other than gain, ever attempt a Christmas story or book? Other than those who have written their Christmas stories for children, like Baum's history of Santa Claus, and for annuals like the once ubiquitous "St. Nickolas," to which everyone from William Dean Howells to a then fifteen year old Eudora Welty contributed in 1925, few writers have come anywhere close to treating the subject of Christmas with anything like success. And yet even such unlikely writers as Nabokov and Mencken have had a go.

For English speaking peoples, in what might once have fairly been described as Christian countries, the answer traces as easily back to Dickens as it does The Gospels. Christmas, and specifically Christmas as Dickens made it, is now so much a part of the secular culture that the still faithful may now be counted on for many an annual, angry bellow against not only the "commercialization" of Christmas, but also against the adoption of the word "holidays" as a more inclusive, less religious usage for the season. (That the Christmas most remember as traditional, at least in America, owes as much or more to Dickens, Baum and Coca Cola as it does to the church, it is unkind to mention, but true none the less.) Practicing Christians are welcome to their opinions, but the fact remains that much of the worst Christmas writing I've read has been from good and sincere Christians, attempting homage to the stories of The New Testament. Shepherds are forever telling the tale from their humble perspective, Magi likewise, though in grander language, and babies are forever being unexpectedly found in barns, come December. Nearly all that I've read of this sort of thing, down even to T. S. Eliot's poem, "Journey of the Magi," has been... well, embarrassing; insipid, obvious and frankly inferior to The Book of Matthew, at least as I read it in The King James Bible. Why try to do something that does not need to be done again?

And that may be the question when it comes to Christmas in a general way too. Few of the Christmas songs written in my lifetime are likely to be sung after I'm gone, yet carols so remote in our memory that their composers are acknowledged now only under the heading "Traditional," remain evergreen. But I think this unfair. Who now doesn't know the story of "Rudolph the Red Nosed Reindeer," created by Robert L. May in 1939, or that "... tiny tots, with their eyes all aglow, will find it hard to sleep tonight" -- and that from Mel Torme's "The Christmas Song," only so old as 1944?

Christmas is unavoidable then, even in fiction. How can an English or American writer not address it eventually? The results though have been, I must say, at least so far as I'm concerned as a reader and as a man scheduled to read Christmas stories aloud, less than consistently good. No less in the modern era than in the more sentimental and religious past, Christmas seems to trivialize nearly effort that's made to comment on it. It is, perhaps, just too ever-present, too much a part of our collective experience, to be truly captured in just another story set at Christmas time. Those few who have succeeded in adding to the small stock of our Christmas perennials, Truman Capote here most obviously coming first to mind, have done so, I think, by writing with a sincere belief, a Dickensian faith if you will, in not so much tradition or the customs of the day, but in the moral. Whatever their religion, whatever their philosophy, times, style, or personal opinion of mankind, those writers, like Capote, like Harte, like Updike and Nabokov, who have actually written great Christmas stories, have done so to a purpose greater than money, or piety, or sophistry, or as a soporific for impatient children. The best Christmas stories have then not the smell of sermons, but the force of parables.

So, again, why is it so damned hard to find something worth reading aloud other than Dickens? Because I think Dickens believed absolutely in his Christmas in a way that we might envy now, believed in the power of this one day, told in new and contemporary stories, not only to comfort, and amuse, but to transform his readers, to make us the better for having read. That is no easy thing to believe, nowadays, and no easy thing to do, ever. But that doesn't mean it is not worth doing. I can only hope the writers keep trying. I will need something next year, something new to me if not to all the audience at my Christmas readings, to read as an encore to Capote. I think though, this year, I may just have to have a bit o' Dickens. Just a bit, though not the "Carol," so perhaps a snippet of Pickwick...