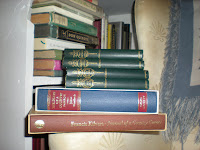 Pique seems to have more immediate consequences, at least to my finances, than any more intense or sustained anger of which I am capable. I've never had to pay damages. After even the worst fight I can remember, I owed only apologies. When truly furious, my blood-pressure swings wildly up and -- drops away to nothing and I faint. No lie. But I understand the finer shades of red. It is part of my inheritance. I was raised by a good, if justifiably disgruntled, working class father. He may not have always had the vocabulary with which to describe an emotion, but being a sensitive sort of child, I quickly learned to gage his unhappiness by the rise in color from his nape to his hairline. Pique, though I would hardly have known to call it so until I was well into my twenties, happened somewhere well above the collar and still below the chin. Any keen observer, with a view unobscured by my beard, could today have seen me reproduce the exact effect. Thus, in part at least, my need of whiskers. Oh, I may have spluttered a bit and cursed a little and offered unasked for explanations of my agitation to my otherwise unaware coworkers, but being piqued, as opposed to simply annoyed or darkly wrathful, there was nothing for it but to spend money. Extravagance is, I find, my habitual response to pique. And being poor, the consequences are all to my wallet, to my credit and -- for another day.

For now, I am happy! I write tonight to exhibit said consequences. The photo above is the first ever taken with my new Nikon Coolpix camera. Even with an employee's discount, and even having had the sense to choose the model with the fewest confusing options, I spent entirely too much on it today. I am no photographer. (I will not tell you just how long it took me to add to this text the picture you see.) I am a taker of snapshots. (I refer you again above.) But to take a snapshot I might share here, I have had need for some time of something better than a disposable camera from the drugstore. Now I have a 21st Century camera with which to illustrate my rather 19th Century musings herein, record my own time-rumpled mug or the ageless attractions of my partner, A., or exhibit, as I do tonight, my thoughtless acquisitions from a flying lunch-hour raid on a neighborhood bookshop not my own.

And look how well I did! The bottom of the stack, as I doubt you'll be able to read, is titled Journal of a Country Curate, by one Frances Kilvert. Just above, another slipcased treasure from the Folio Society, The Diary of a Country Parson, by James Woodforde. My work-husband J. remarked dryly, on being excitedly asked to marvel, that "surely now" my shelf of English Vicars "must be complete." Silly J. The four slim volumes atop the pile are all from Harper and Brothers, New York, MDCCCXCII, and read, from bottom to top:

Concerning All of Us, by Thomas Wentworth Higginson, Americanisms and Briticisms, Etc., by Brander Matthews, Criticism and Fiction, by W. D. Howells, and finally From the Easy Chair, by George William Curtis.

It was that last I first picked off the shelf at lunch. Pretty little thing, just like it's brothers, but my instinct made me take up George William Curtis first. Opening to the Contents, I found, straight away "Dickens Reading (1867)" and "A Little Dinner with Thackeray" and a strange and contented calm spread through me like a a cooling draft. Naturally, I had to gather the whole brotherhood up. The ecclesiastics came along I misremember how.

I already forget the total on the receipts, as I forget now the slight quarrel that sent me off in search of my lost equilibrium. Bibliophilia is such a minor vice. And isn't my new camera nice? Such bargains. You should see my neck, all alabaster beneath the beard again.
Posted by usedbuyer 2.0 at 9:34 PM