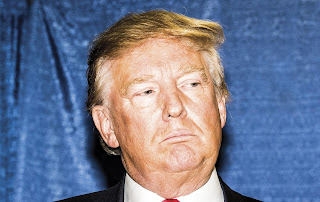 From Nothing Is Wrong and Here Is Why: Essays, by Alexandra Petri

"When the American people voted unanimously to declare Donald Trump a genius (this is what it means to be elected president on your first try) at first, he did not feel any different."

From The Day Donald Trump First Became a Stable Genius
Posted by usedbuyer 2.0 at 12:01 AM