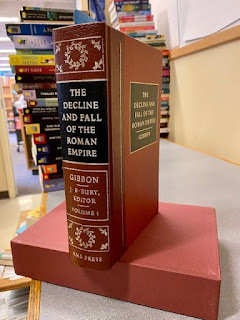 From The Decline and Fall of the Roman Empire, by Edward Gibbon

"We are told that in the sack of Athens the Goths collected all the libraries, and were on the point of setting fire to this funeral pile of Grecian learning, had not one of their chiefs, of more refined policy than his brethren, dissuaded them from the design, by the profound observation, that as long as the Greeks were addicted to the study of books they would never apply themselves to the exercise of arms. The sagacious counsellor (should the truth of the fact be admitted) reasoned like an ignorant barbarian. In the most polite and powerful nations genius of every kind has displayed itself about the same period; the age of science has generally been the age of military virtue and success."