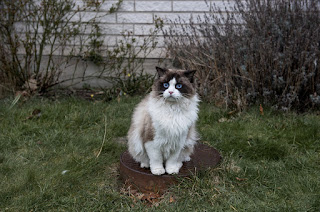 From A Man Called Ove, by Fredrik Backman, translated by Henning Koch

"It is very quiet  in the house.  In the whole neighborhood, actually.  Everyone's sleeping.  And only then does Ove realize that the cat will probably wake at the sound of the shot.  Will probably scare the living daylights out of the poor critter, Ove admits.  He thinks about this for a good while before he determinedly sets down the rifle and goes into the kitchen to turn on the radio.  Not that he needs music to take his own life, and not that he likes the idea of the radio clicking its way through units of electricity when he's gone.  But because if the cat wakes up from the bang, it may end up thinking it's just a part of one of those modern pop songs the radio plays all the time these days.  And then go back to sleep.  That is Ove's train of thought."