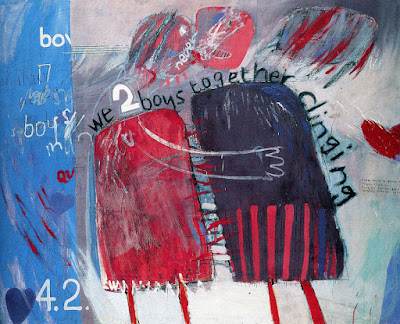 From The Complete Poems of Walt Whitman, edited by Francis Murphy

WE TWO BOYS TOGETHER CLINGING

WE two boys together clinging,
One the other never leaving,
Up and down the roads going–North and South excursions making,
Power enjoying–elbows stretching–fingers clutching,
Arm’d and fearless–eating, drinking, sleeping, loving,
No law less than ourselves owning–sailing, soldiering, thieving,
threatening,
Misers, menials, priests alarming–air breathing, water drinking, on
the turf or the sea-beach dancing,
Cities wrenching, ease scorning, statutes mocking, feebleness
chasing,
Fulfilling our foray.
Posted by usedbuyer 2.0 at 12:03 AM