A Much Translated Man 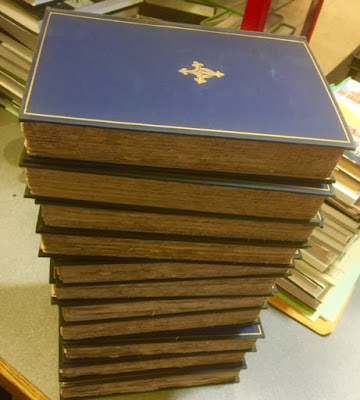 “The word 'translation' comes, etymologically, from the Latin for 'bearing across'. Having been borne across the world, we are translated men. It is normally supposed that something always gets lost in translation; I cling, obstinately to the notion that something can also be gained.”

Call it, a problem in translation.

The box was one of those huge things they sell at truck-rentals, the kind of box intended for towels and linens, not books.  The poor woman who brought it in could barely carry the thing.  Getting it up on the desk took the two of us.  Inside there were a dozen different Hemingways and a dozen Faulkners to start, but all  book club editions.  There was a hardcover Dickens, but a Reader's Digest.  None of this unusual, or saleable really.  But then, there were some promising volumes of Mr. Browning in rather delicate leather, all with lovely endpapers and such, American, early 20th Century. These turned out to be part of a broken set and half had broken hinges, and so back into the box they went.  A full set of Browning, even if repaired, and however lovely, being worth not a lot, might have moved to my "buy" pile.  Hope springs eternal. Even then, not much money would have been involved and I should probably have had the exquisite but not infrequent pain of seeing the set sell, if at all for no more than I paid for it.  That's the kind of unpleasantness best avoided, I've learned -- sorta.  Commerce is cruel, and however reluctantly I serve the Profits. 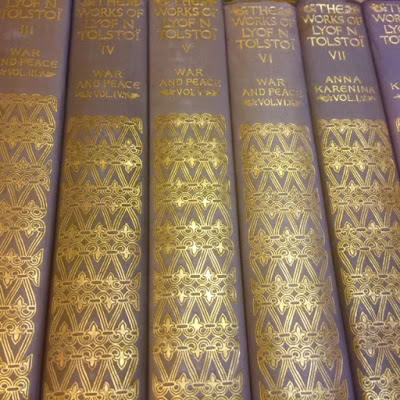 Then there was Tolstoy, or "Tolstoi", to use the translator's spelling.  A set of eleven volumes, including War and Peace in six books and Anna Karenina in three.  Volumes ten and eleven had Childhood, Boyhood, and Youth, and The Cossacks and Sevastopol, respectively.  That was that.  Published by Charles Scribner's Sons in 1899, this was the first uniform, American edition of Tolstoy.  The problem with it, or the first of a few, is that even at that date this was far from a complete translation of the writer's work.  Over the next decade or so, an additional nine volumes would be added by the same editor.  And there's the next issue.

Nathan Haskell Dole (August 31, 1852 – May 9, 1935) was a respected American scholar; educator, editor, critic, and translator.  Of stout, New England stock, son of respectable minister, as a boy Dole taught himself to read in French, German, Greek and Latin.  He would go on to Exeter/Andover and Harvard and to teach, lecture and write like a very proper Brahmin indeed. He also translated works from Spanish, Italian, and Russian.  His would have been the "Tolstoi" my great-grandmother read, had my great-grandmother read Tolstoy.  (And she might have done.  She was after all a school teacher and a good Christian.  Remember also that, according to an article I've just read by Tolstoy biographer and translator, Rosamund Bartlett, "At the beginning of the 20th century, there were more people reading Tolstoy in translation than any other writer.")

Most American and English readers of the great Russians before the turn of this century would probably have read the translations of Constance Garnett.  Her reputation has declined, at least in part for her reliance on French translations for her Russians, but also because of an almost endearing delicacy, not to say prudishness, particularly in intimate matters no longer likely to shock even convent girls, were there any convent girls still around.  With Mrs. Garnett a lady is always enceinte rather than pregnant, for example. The translations of Richard Pevear and Larissa Volokhonsky would seem to have won the field in recent years, but theirs is certainly not the only Tolstoy in English these days.

Dole's Tolstoy, in even this abbreviated edition (1899) of just these first eleven volumes, seems to me none the less an admirable thing.  In her article on Tolstoy's translators, Bartlett quotes a critic from the New York Times of the day complaining that Dole's War and Peace contains "the geological subsidence of a layer of Russian into a substratum of English, leaving a number of words to linger fossil-like amid the latter in untranslatable durability”.  Oh dear.  Still, reading the first page of the novel in Dole's, Garnett's, and Pevear and Volokhonsky's versions, my inexpert ear finds much to admire in the oldest. 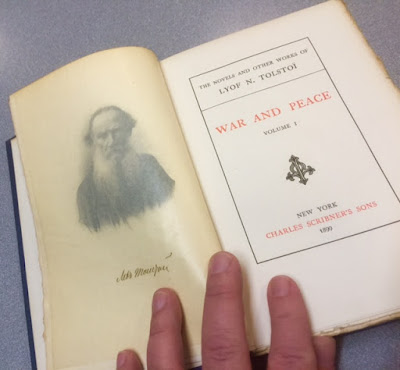 "'Well, prince, Genoa and Lucca are now nothing more than the apanages of the Bonaparte family.  I warn you that if you do not tell me we are going to have a war, if you still allow yourself to condone all the infamies, all the atrocities, of this Antichrist, -- on my word I believe he is Antichrist, -- I will not recognize you; that is the end of our friendship; you shall no longer be my faithful slave, as you csll yourself.  There now, cheer up, cheer up, I see I frighten you.  Come, sit down and tell me about it.'

Thus on a July evening in 1805 the well-known Anna Pavlovna Scherer, maid of honor and confidential friend of Empress Maria Feodorovna, greeted the influential statesman, Prince Vasili, who was the first to arrive at her reception."

Constance Garnett's first paragraph runs very near to Dole's, with small variations.  Here's the same passage from her second, by way of comparison:

"These words were uttered in July 1805 by Anna Pavlovna Scherer, a distinguished lady of the court, and a confidential maid-of-honour to the Empress Marya Fyodorovna.  It was her greeting to Prince Vassily, a man of high rank and office, who was the first to arrive at her soirée."

To my reading, the Nathan Haskell Dole is better; more economical, better made as English.

Pevear and Volokhonsky's Anna Pavlovna Scherer starts in French, as I must assume Tolstoy has her speak in his original.  Most annoying, frankly.  Means the very first thing the monolingual reader like me must do is refer to a footnote!  No way to start a long-term relationship, I say.  (Tolstoy I suppose could assume French in his readers.  No idea why anyone translating Tolstoy into English should.)

I didn't read far enough in Dole's translation to stub my toe on any of the outcrops of Russian of which his long dead NYT reviewer complained. I can only speak from the little I read, but even my own cursory review of the first page makes me wonder if Garnett et al have actually done much to improve on Dole.

Not reading Russian, I can't of course speak to which translation might be most loyal to the original.  I know which one reads best to me in English, though.

And so, despite the brevity of the set I saw today, and it's age, I bought it to sell used at the bookstore where I work.  Didn't pay much for it. Won't be expensive.  Someone though may open that first volume and like the sound of those sentences as I did.  Who knows?  That person then may read all six volumes of Tolstoy's masterpiece, may even go on to read the other five, may even then search out the missing nine that came later.  As good a start as any.
Posted by usedbuyer 2.0 at 10:53 PM