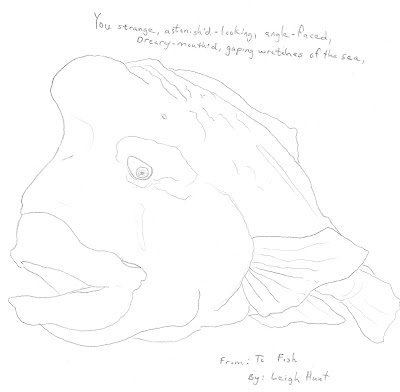 I have a friend who loves fish. Sensible people do, of course; fried, baked, smoked, etc. My friend loves them live, fish, little ones mostly, pretty ones. When he watches them they mesmerize him and make him content. His fish are all beautiful, bright, fast and slow. I do like listening to my friend, a poet, when he's on about his fish, or fish in general. He works, don't you know, my friend, in an aquarium. He has aquariums -- less grand than those at work, of course, but lovely -- all at one end of his apartment. Going to a big aquarium here when he visited us, was genuinely fun.

Anyway, I started recording some poems about fish, and the sea, and the shore, to post here, mostly for my friend to find. I sent him a connection to one of these, "To Fish," by Leigh Hunt. It's a funny little poem, all flutey horror at the ugliness of fish, the dullness of their lives, their lack of conversation. Most amusing, I thought. Friend seemed to like it fine.

I mentioned I might, or that I should, illustrate the poem, maybe make a little book out of that poem, with pictures of some wonderfully ugly fish, with which Nature seems to have amused herself aplenty.

My friend's been most encouraging.

I've never drawn fish, really. I've doodled one or two before, to amuse said friend I suppose, but when I tried to make them as pretty as my friend's fish, well... The key might be in drawing just the ugly ones, which I like better and which might better suit my small talent for jokes. Here's a first then, just to try my hand, push the pencil around a little and see what comes of it. I like it well enough.

We'll see. I've never thought before to make just such a little book from just such a comic little poem. We'll see.
Posted by usedbuyer 2.0 at 10:57 PM