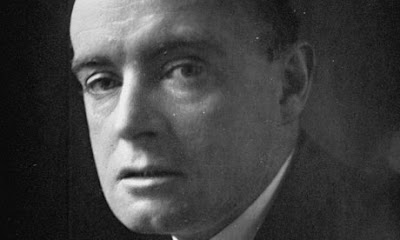 We've undertaken, as I may have mentioned here before, to read aloud something in the way of the supernatural, or at least, the unusual, every Saturday afternoon in October at the bookstore where I work. I must confess, the idea was indeed mine. Beyond my well established penchant for showing off in just this way, I thought the opportunity to get a few other clerks up and on their feet, reading, if to no one else, each other every Saturday for a month together might prove not only fun but the point that we need not spend either an inordinate amount of time, or money, to provide a slight entertainment to the the reading public. As of now, it remains to be seen if anyone will notice, or if anyone other than myself and my usual co-conspirators in this sort of silliness will show up. It was easy enough getting my immediate supervisor and pal, dear P., on board. Like me, she's had some theatrical training -- though she took hers considerably further than I ever managed to drag mine -- and she's already proved herself, in our earlier go at 84, Charring Cross Road, and our birthday tribute to Dorothy Parker, quite the game gal, and quite the accomplished performer. Likewise, the resident young novelist and in-house copywriter, my friend M., allowed himself to be bullied into participating without much protest. He too read for the Dorothy Parker event, as well as at various venues in his own person as an up and coming member in good standing of the local literati, hip division. I then set about recruiting among the rest of the staff and while some I thought likely enough never the less declined, and while some fell away, there are, as of this date, no less than another three or four readers lined up for the month, to say nothing of a volunteer or two from outside the store; one a staff member from another store, and the other -- our very special guest star, if all goes well -- a man who reads aloud regularly to adult audiences at the Seattle Public Library and who has been widely acknowledged as something of the local authority on just how this sort of thing might best be done.

All very exciting, I must say.

Now if it turns out that no one comes to these afternoons, and each reader should find him or herself reading just to the other one set to read that day, I don't know that that would much discourage me from suggesting we do this kind of thing again, and again, and yet again. One of the functions of an independent bookstore, I should think, is to not only offer our customers opportunities to interact with books in ways they may not otherwise experience, but also to offer the staff opportunities to join in and do likewise. Working in independent bookstores, whatever else it may or may not have done for me, has regularly provided me with a platform from which to preach The Good Word about good books, old and new, in print and out, to anyone who might listen. Because I work in a bookstore, I've had the chance to write about books, talk about books, discuss books not only with a variety of people who write and read them, but also with the people who teach them, the people who sell them, the people who publish them, and even the people who buy and read them. I have represented the bookstore where I work on a committee, spoken on a panel at a college store conference, and handed out coupons in the street. I've given interviews about the business, and the used books business, most recently, to actual reporters for real magazines, and while I can't say I did that last very well, it was rather fun doing, whatever it was I ended up saying. Finally, and most satisfactorily from the point of view of my inner dancing bear, the bookstore has periodically allowed me to rise up on my hind-legs and growl and grunt before the public. I have proudly, if somewhat prematurely, seen my annual Christmas reading described as "a tradition," already, and if only in-house. Still. Makes one blush, someone saying something sweet like that.

Reading aloud is an activity I endorse anyway and everywhere as generally good for the soul. Good for the books, and the common reader too. I always argue that if one would understand great writing, in poetry or prose, one ought to get in the habit, sadly now thought to be somewhat eccentric, at least among the laity, of reading it right out loud. If one would have some better sense of what was being being said in books, one simply ought to say it, as written, and listen. Voice doesn't matter, or skill. That may come with practice. The point, at least when one is alone or in the company of trusted friends, is to take the words in and then say them out, tell the story, listen to the language and the thought, learn the punctuation, have a go.

Reading before what we who do it always rather hopefully insists on calling, "the public," is just a natural extension of this harmless private hobby, a way to extend one's pleasure in a book to other people, and a chance, rare enough these days, for anyone who might wish it, to hear our literature aloud, as most human beings once heard it, for want of any other means, but also because there can be a magic different in kind somehow to listening to a story in a group to reading one alone. I can't quite explain it, but reading, as it were, a book together is something more people should know.

And so we're off with this little series for Halloween, starting tomorrow afternoon.

I've taken on doing the first reading just on my own. Nothing to do with wanting the spotlight all to myself, I hope. The idea was to give everyone else, specially the new ones, that much more time to prepare without delaying the thing or missing a Saturday. Next week, as I'll be in Portland, some of the other readers will get their first crack. Wish I didn't have to miss it, but there we are.

So, why start with Saki?

Well, the supernatural, by definition, would seem a rather quaint idea, nowadays. Ghosts, goblins, gods, and all such bogeymen and beastly things already seemed somewhat antique even so long ago as when the greatest 19th and early 20th Century practitioners of the supernatural story were at work perfecting the form in English. From Poe to Le Fanu, Blackwood to Wharton and or either James, Henry or the great M. R., there's not really a mystic among 'em. Cold eyed rationalists would seems to make for the very best companions when wandering out into the dark and possibly on to the other side. One might be forgiven for thinking, back around the middle of the last century when I'd just about arrived on the scene, that superstition had about gasped it's last in the new and improved, technocratic West, and that the ghost in the machine would soon be given up entirely, and yet...

The devils, it seems, have survived the deity. Now just why is that? I would suggest a theory, based I freely admit on absolutely nothing at all but my own ample and well established gut. Speaking then just for myself, the most frightening monsters now about lurk not so much under the bed, or in the shadows, the ghouls aren't in the graveyards nowadays, but rather preside in the well-lit, exquisitely appointed executive offices of Wall Street banks, run for congress on the new Know Nothing ticket, conduct youth retreats, rather than the traditional black Mass, and now preach via satellite prosperity gospel to the poor and the worst of the old superstition and hatred of the other to an audience around the world. These then are the monsters to make a grown man, in the 21st Century, shiver in his slip-on shoes.

In such a world, is it not perhaps better then to revisit something of the innocence lost to most of us when we graduated from story books to the faerie tales told in The Wall Street Journal? Better to remember, this Halloween, when ghosts might still be made to disappear with the coming of the dawn and monsters might be killed by a silver bullet. To return then to one of the lost pleasures of childhood, when we might be frightened for no better reason than because it can be fun, when our nightmares were populated just by werewolves rather than "pitbulls in lipstick," when we were haunted only by ghosts rather than the spectre of some disaffected, undead zombie, sure of Heaven, with a bomb strapped to his chest.

Hector Hugh Munro, also know as Saki, was an English gentleman of the most exquisite lettres. An unrepentant old Tory and lifelong bachelor, who lived with his dear sister, Ethel, wrote hilarious and macabre little books, and who, at only 43, too old to be there but there none the less, was last heard in in a shell crater near Beaumont-Hamel, France in November 1916, to say, "Put that bloody cigarette out!" before he was shot dead by a German sniper. I can think of no more thoroughly modern figure with which to begin our somewhat nostalgic return to the horrors of childhood, can you?

Saki, in his all too brief career, transformed the typically sentimental, Edwardian English short story into something distinctly less predictable, something much funnier, really, but not so "nice." A Saki story was likely to tilt away under the reader's pince nez and suggest something fundamentally unwholesome about everything familiar, something a bit mean about even the best people, and something rather nasty, just there, under the anti-mascar. He didn't dislike the traditional dish, you understand, he just thought the treacle wanted a bit of acid.

Saki isn't the sort of writer that meant to scare the children. He meant to discomfort the grown ups, though always and only in a most amusing way.